Well it is a week since we came back from Novacon42 in Nottingham.  We had a great time meeting with old friends and meeting lots of new friends too.

The hotel made a great venue for the con, with very good facilities, including Black Sheep ale on tap in the bar!  We were located in the dealer room, which was generally pretty busy.  We had many very interesting conversations with our customers regarding both the books we were selling and general aspects of science fiction and book collecting.  As this was our first con and we are a start-up, it was also good to meet other booksellers such as Andy Richards of Cold Tonnage and Brian from Porcupine Books. I found our conversations to be particularly enlightening with regard to selling at cons.

We spent a couple of frantic hours setting up.  After we had finished we stepped back and admired our work.  It was then that an unexpected, and most surprising, thing hit us…. What great stock we have and how great it looked.  When you sell on the internet, 99% of the time your stock is boxed or shelved, so we had never seen our stock displayed as you would with a bricks and mortar business.  It was a real pleasure to see row upon row of excellent quality books, in terms of both condition and the depth of established authors. 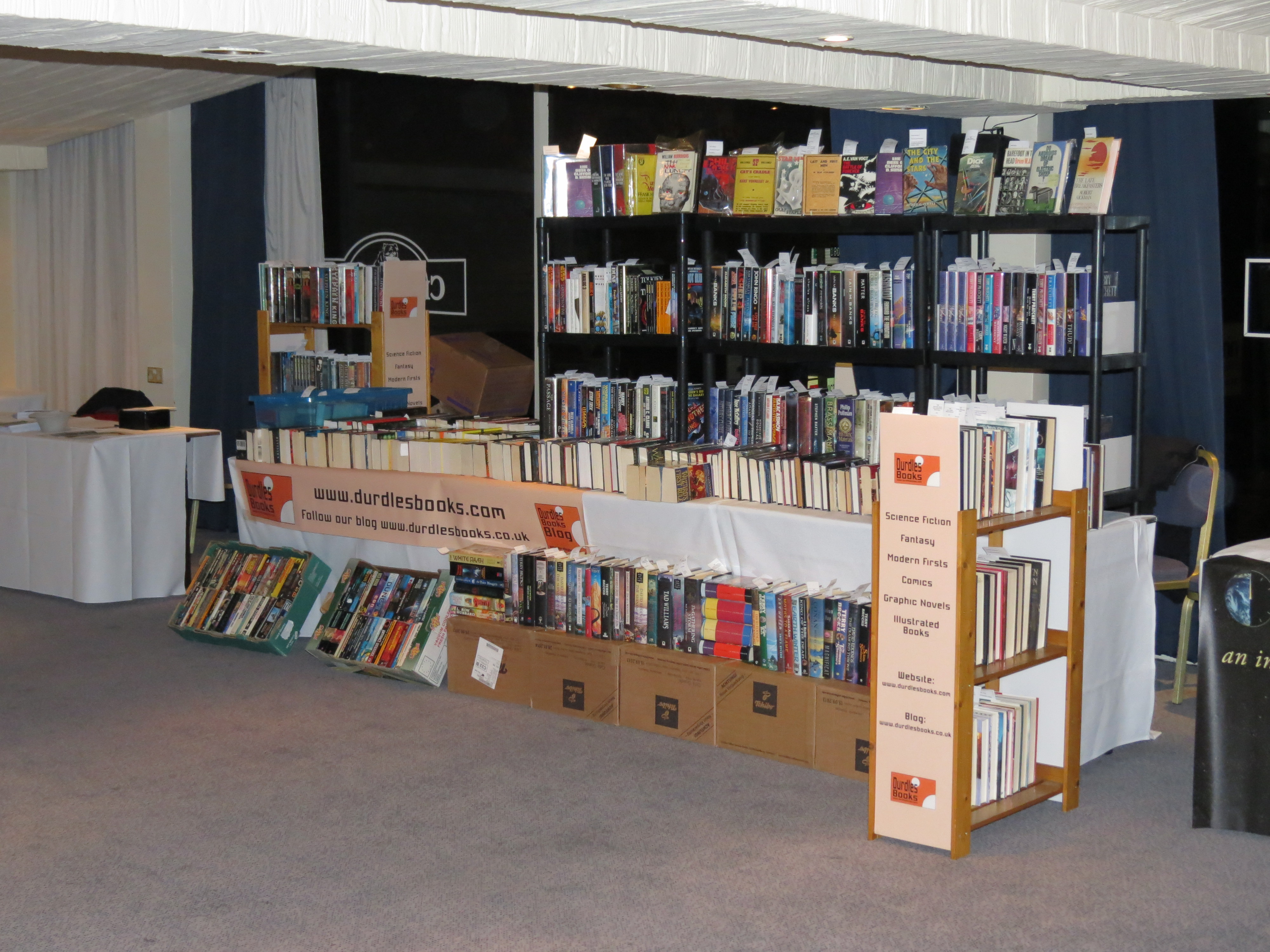 Our tables at Novacon42 with some great books for sale. 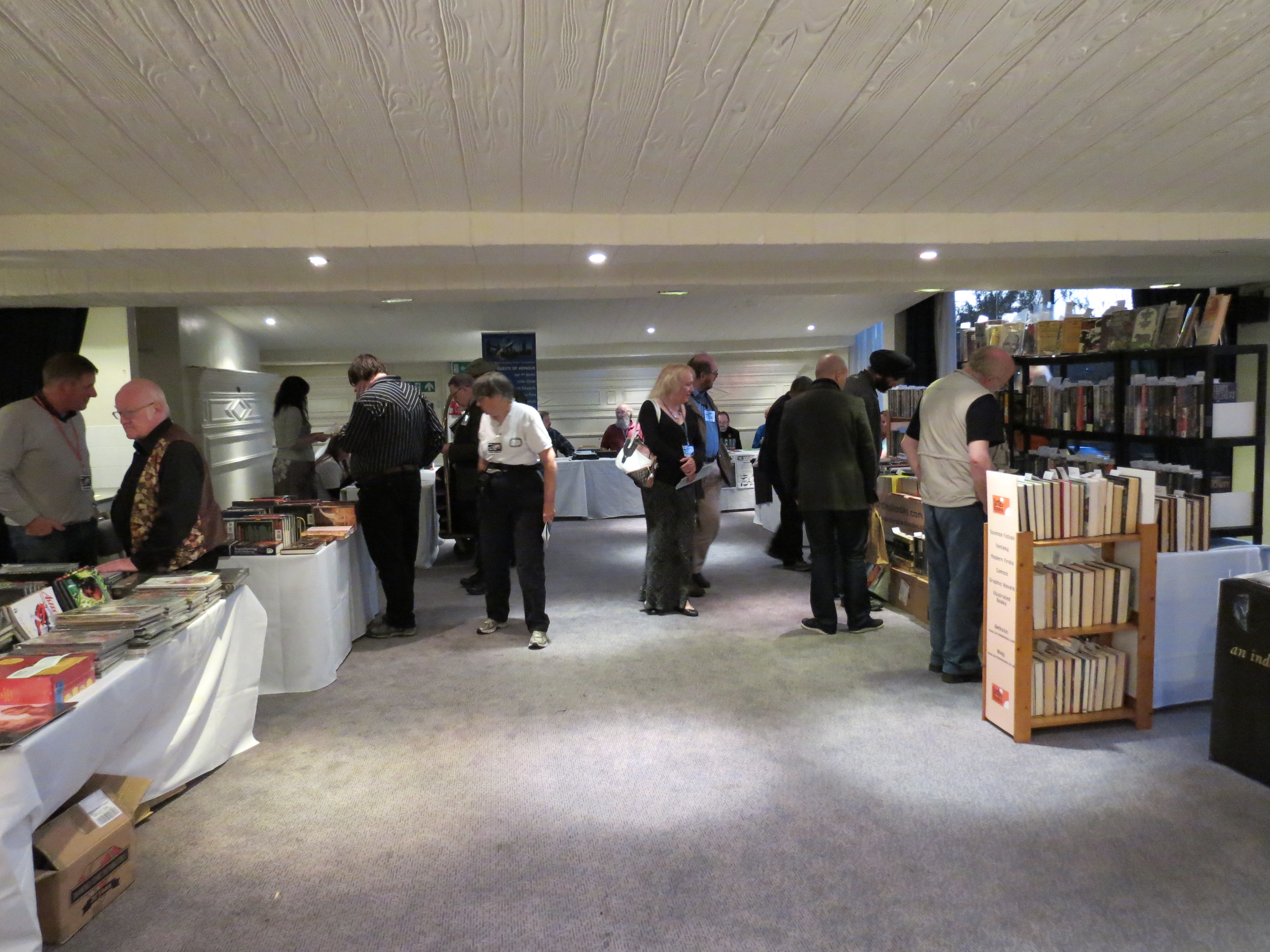 During the course of the conference we were introduced to a number of people whom I had wanted to meet for a long time.  We were introduced to Rog Peyton who ran Andromeda Books, a very well -known and respected Science Fiction bookshop in Birmingham.  Over the weekend we spent a lot of time with Rog and very much enjoyed his company, and stories about book selling and fandom.  Rog is on the committee of the Birmingham Science Fiction Group who organised Novacon42.

We also met artist David Hardy, a man whose work I have admired for a long time.  David produces beautiful space art which has graced the covers of many magazines and book covers, some of which, no doubt, you will have in your own collections.  He has illustrated books by Sir Patrick Moore, and has published a number of books of his art.  Hardyware: The Art of David A Hardy, is an excellent collection of his work. He also compiled and wrote Visions of Space: Artists Journey Through the Cosmos, featuring the art of 72 leading space artists going back to 1874. More recently David has released Aurora: A Child of Two Worlds, a revised updated edition of his first novel.  I recommend that you visit David’s site AstroArt to see his work and marvel.

David was also responsible for one of the highlights at Novacon42; the official launch and premiere of the Road to the Stars DVD.  The film was originally made in 1957 by a Russian film director Pavel Klushantsev, and there has never been an English version until David decided that there should be. He replaced the narration with English captions, and had sound-track mastered using specially-written music by The Light Dreams Music.

We later met the talented guy behind The Light Dreams, Alex Storer. Alex creates electronic music, and cites his influences as Jarre, Mike Oldfield, and Numan amongst others.  If you like soundscapes or electronic music you will enjoy his output.  I have subsequently found out that Alex also runs a John Foxx fan site, called Quiet City .  If like me, you like John Foxx’s music then you’ll get some idea where Alex is on the musical spectrum.  Not only is Alex creative in music, he is also a super artist and a number of his works were displayed in the art room at Novacon. You can listen to his music and see his art at his website http://thelightdream.net/ His John Foxx fan site can also be found here… http://www.quietcity.co.uk/

For us, Novacon was a very enjoyable and successful weekend.  As you can see we met some very interesting people, and enjoyed the experience of our first con…  oh yeah,  we also sold some books too!  We must thank the BSFG for their excellent organisation of the con, and also John Peters, for his advice and help over the whole weekend.  We are very much looking forward to being at next year’s conference, roll on November!

Please leave comments if you were at Novacon42 , we would enjoy hearing your experiences….Cheers!